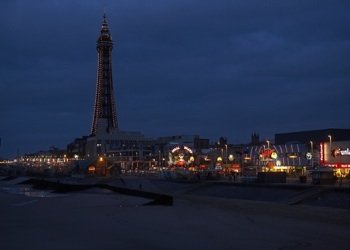 It would ruin the Blackpool illuminations (pictured) and rid London of Soho’s neon signs – but this week it was proposed the UK should follow the lead of the French and bring in a ban on leaving lights switched on overnight.

Last month France’s rule outlawing lights not being used at businesses, shops and public buildings between 1am and 7pm. The ban includes lights on shopfronts and windows and fines of as much as €750 (£649) a night for breaching this seem likely to be strictly enforced.

Stuart Thorogood, UK President of French-owned energy management firm Schneider Electric believes it would be a much quicker solution to cutting energy use than the Government’s current policies.

He said: “While the UK government is tied-up with implementing energy management schemes which realistically take months to come into effect, this is the instant solution we need, which allows businesses of all sizes to get involved.”

The opportunity for Brits to seize is obvious as the technology to cut the lights at specific times already exists in the UK, he went on.

If ministers don’t take the initiative, firms should grab it anyway, added the energy management boss: “Britain’s companies should already be adopting this technology to ensure their buildings are truly smart and future-proofed.”