Four people have so far been arrested in a protest against fracking in Greater Manchester. More than 50 anti-fracking activists from across the nation gathered this morning to protest against […] 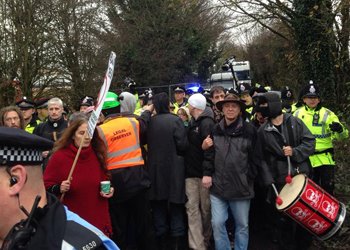 Four people have so far been arrested in a protest against fracking in Greater Manchester.

More than 50 anti-fracking activists from across the nation gathered this morning to protest against IGas Energy’s plans to drill at Barton Moss.

Greater Manchester Police arrested three men aged 41, 42 and 47 and a woman “on suspicion of obstructing the highway” – all currently in custody.

Rachel Thompson, member of the Frack Free Greater Manchester group told ELN protestors tried to stop the energy firm’s trucks from going onto the site (pictured) but the road was later cleared by police to allow them in.

Earlier this year IGas Energy confirmed its plans to build a vertical test well to check for oil and gas at Barton Moss – which is expected to take between eight to 12 weeks – but said they have no plans for fracking yet.

Pearl Hopkins, who lives within a mile of IGas Energy’s site said: “This industry is being forced upon us. We’ve been backed into a corner and we now feel we have no option but to take matters into own hands and protect our community. We have lost faith in national and local democracy and are putting our efforts into the planned protests at the site.”

A spokesperson from IGas Energy said: “We acknowledge the right to peaceful protest, however we do not condone any activity that disrupts or inconveniences the local community or local businesses.

“IGas will continue to operate in accordance with all the necessary regulation and permitting.”

If the energy firm decides to go ahead with fracking on the site, it would require separate planning permissions from DECC and the Environment Agency as well as further consultation with the community.

A spokesperson from Greater Manchester Police added: “Officers are continuing to monitor the demonstration and work with partner agencies to ensure it passes safely and without incident, while respecting the democratic right of the group to peaceful protest.”

Earlier this year IGas estimated there could be up to 170 trillion cubic feet of gas within their licence blocks in northern England.