“My message for Blackpool? Ask if fracking is REALLY in your name”

Citizens of Blackpool should think twice before they welcome shale gas developers with open arms, says the maker of a documentary about fracking. The film ‘Unearthed’ shows South African Jolynn […] 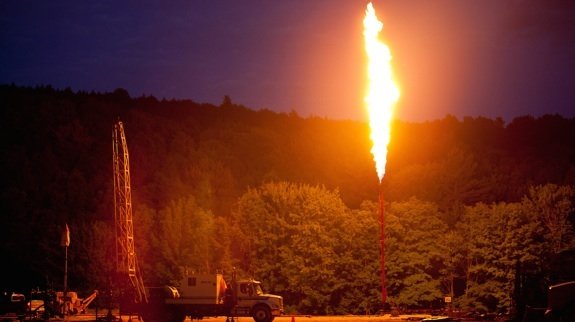 A still from 'Unearthed'. Image courtesy the filmmaker

Citizens of Blackpool should think twice before they welcome shale gas developers with open arms, says the maker of a documentary about fracking.

The film ‘Unearthed’ shows South African Jolynn Minnaar’s journey to the United States to see how fracking could affect her homeland, the sprawling semi-desert region of Karoo.

At first positive about the economic benefits it could bring to an area with severe poverty, she soon starts to have misgivings.

Speaking ahead a screening of the film at the ICA in London next week (30 October), she told ELN: “My message to Blackpool would be to really ask if the development is in their name. Often the problem in Africa is people come in and declare this is a more successful way of doing things….

“I would say do the risk-benefit analysis, from cradle to grave.”

Dozens of interviews with residents reveal the problems with drinking water – blame for this was sidestepped by the oil and gas companies because there wasn’t a case directly linked to the specific process of fracking underground.

A string of scientists and engineers are also featured. A number of them suggest the industry’s view of fracking doesn’t include the whole process from start to finish.

It also tries to bust the myth that fracking is a 60-year-old process, citing comments from Cornell University’s Professor Anthony Ingraffea, and points the finger at mutual non-disclosure agreements between homeowners and energy companies for shutting down research into fracking.

Shale gas and the way it is styled as a means to regenerate economies has “really put a magnifying glass on areas that need development”, believes Minnaar, be it the Karoo or towns in the UK like Blackpool.

The documentary took three years to film and research and it hasn’t been an easy ride, she says, both financially and even sometimes personally as she on occasion felt intimidated.

But Minnaar vowed to continue her campaign: “I’m just a filmmaker, I don’t know if I can stop this across the world but I can try… to empower people with information.”