Could a secretive and controversial trade deal between the US and European Union affect European energy markets, the competitiveness of its businesses or its renewable energy sector? That’s the question […] 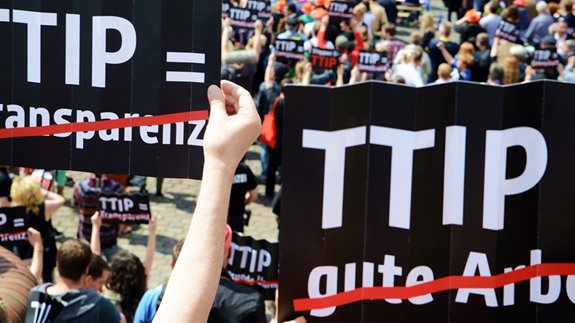 A protest in Germany about the secretive TTIP talks, May 2014. Image: Andreas Gerhold via Compfight cc

Could a secretive and controversial trade deal between the US and European Union affect European energy markets, the competitiveness of its businesses or its renewable energy sector?

That’s the question behind a study commissioned by MEPs on the EU’s energy and trade committee (ITRE) who wanted to know what the Transatlantic Trade and Investment Partnership or TTIP will mean for the EU.

The answer, according to the authors, is that it could “bolster” Europe’s energy security. But what do they mean by that?

The Transatlantic Trade and Investment Partnership – which was criticised last week for giving “too much power” to big US corporations – is a free trade agreement (FTA) aiming to get rid of some barriers to business between the two land masses.

One change which the EU allegedly hoped was on the cards, a lifting of the ban on exporting oil from the United States, is not likely, according to the report.

It states: “First of all, we do not foresee a removal of the ban on crude oil exports as a result of the FTA… public opinion in the US is generally negative towards exports, as it is likely that they would increase the price of gasoline.”

The US does allow gas to be exported to free trade partners though and its recent shale gas bonanza – plus the Russia-Ukraine conflict – led EU leaders to call for closer gas ties last year.

The report argues: “The TTIP is not likely to have an adverse effect on the competitiveness of European industries in terms of lower electricity costs. However, the TTIP could have a positive effect on energy security, if it leads to additional diversity of supply in the EU energy market.”

As for renewables, the report suggests trade in green energy technologies could be boosted by the removal of local content requirements (LCR). But it adds there are “concerns” about US requirements. It suggests these could “potentially undermine the European standardisation process”.