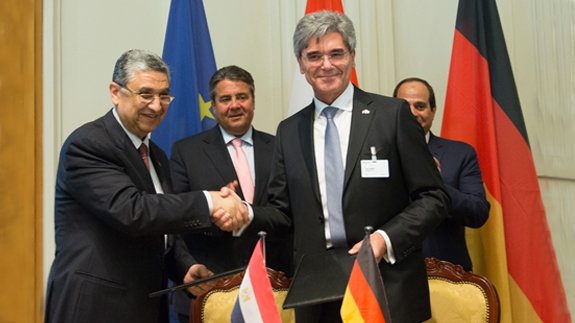 Siemens has received orders worth €8 billion (£5.9bn) to boost power generation in Egypt.

The German engineering giant will build three combined cycle gas-fired power plants – with a total capacity of 14.4GW – as well as up to 12 wind farms which will include around 600 turbines, generating 2GW of electricity.

The total capacity of 16.4GW is expected to increase power generation in the country by more than 50%.

Siemens will also build a blade manufacturing facility, which will provide training and employment for up to 1,000 people, in Egypt’s Soukhna region.

Joe Kaeser, President and CEO of Siemens said: “With these unprecedented contracts, Siemens and its partners are supporting Egypt’s economic development by using highly efficient natural gas and renewable technologies to create an affordable, reliable and sustainable energy mix for the country’s future.”

This is said to be the single biggest order for Siemens.

The signing ceremony was witnessed by Muhamed Shaker, Minister of Electricity and Energy of Egypt and Siemens CEO Joe Kaeser (front), the German Vice Chancellor Sigmar Gabriel and the Egyptian President Abdel Fattah El-Sisi (back).