Surfers ‘at risk from increased pollution’

Surfers in the UK could be at risk due to an increase in pollution incidents. That’s according to Andy Cummins, Campaign Director for ‘Surfers Against Sewage’, an environmental charity protecting […] 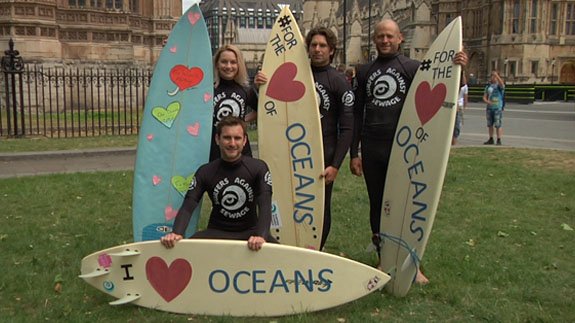 Surfers Against Sewage at The Climate Coalition at Westminster Image: ELN

Surfers in the UK could be at risk due to an increase in pollution incidents.

That’s according to Andy Cummins, Campaign Director for ‘Surfers Against Sewage’, an environmental charity protecting the UK’s oceans, waves and beaches.

The charity joined hundreds of people who marched across Westminster as part of a lobby this week to urge MPs to do more to tackle climate change.

Mr Cummins told ELN: “We need the government to address the problem because surfers can be at risk from increased pollution incidents, heavy rain and more intense rainfall which can cause sewers to overflow.

“I think decarbonising the economy would be a great step forward. We’re looking at moving away from coal and embracing renewable energy would be a step that is sustainable for the future.”

More than a hundred MPs also took part in the rally to discuss climate change issues and listened to different views from the public.

Scott Mann, MP for North Cornwall, said more needs to be done to invest in carbon capture and storage as well as tidal and geothermal technologies.

He said: “We need to do more in terms of carbon capture. I think it’s a growing industry and I think in terms of our renewable sector, I’m not a big fan of wind turbines.

“I hold my hands up on that – it’s not something I’ve supported in the eight years I’ve been a member of parliament and also as a councillor but what I would say is I’m not anti-renewables.”

ELN also spoke to the general public about whether the government is doing enough to tackle climate change.

Some said they were “seriously worried” and they want the government to be “a lot greener”.