New trucks could make Waitrose the greenest of grocers 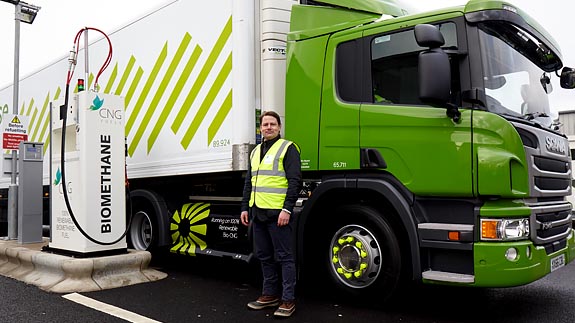 The 10 Scania-built lorries use new, high-pressure carbon fuel tanks to store compressed natural gas (CNG), which allow for more methane to be squeezed in, massively increasing their range from 300 miles to 500 miles.

CNG fuel is around 40% cheaper than diesel and emits 70% less Carbon Dioxide – each lorry will save more than 100 tonnes of CO2 a year.

The supermarket’s new trucks cost 50% more than traditional diesel models but are predicted to generate savings of between £75,000 to £100,000 over the course of their lifetime.

Philip Fjeld, CEO of CNG Fuels said: “High pressure carbon-fibre fuel tanks demolish the ‘range anxiety’ concerns that have made many hauliers reluctant to move away from diesel to CNG.

“Renewable biomethane is far cheaper and cleaner than diesel and with a range of up to 500 miles, it is a game-changer for road transport operators.”