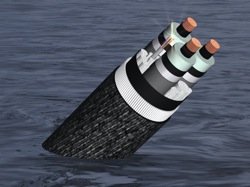 Nexans is a global player in the cable industry based in 39 countries and last year had sales of 5bn Euros (£4.2bn). The Lincs wind farm will be using 64.8 km of 3-core cable with a conductor. It will also incorporate fibre-optic cables for the monitoring and control of the wind farm. In total, the cable will be 85Km long.

The cables will be produced at the Nexans plants in Germany and Norway with delivery of the cables due to begin next March.