BMW sees electric vehicles as a serious part of their future. As the first six months of a road trial for their prototype Mini E comes to a close, we […] 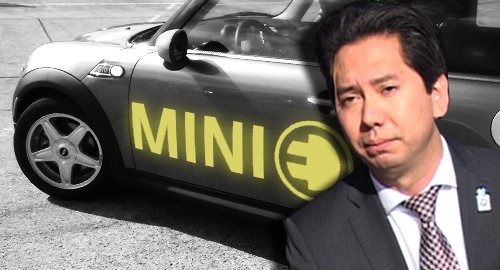 BMW sees electric vehicles as a serious part of their future.

As the first six months of a road trial for their prototype Mini E comes to a close, we find out just how useful their new machine really is. “The Mini E has been about learning,” said Global Head of Mini E, Glenn Schmidt. Labelled by BMW as ‘an experiment’ the purpose of the trial is to have a ‘research focus’ while using real users and real customers. The initial results of the owners’ experiences have been positive in terms of range, charging and safety.

Mr Schmidt told ELN: “The project was set up to learn internally but also externally to share the findings with users, stakeholders and policymakers by dealing with the two biggest problems faced by electronic vehicles: is the vehicle’s range sufficient? Is charging the vehicle’s battery a problem?”

The Mini E has a working range of 100 miles on one charge, which is impractical for motorway driving but fine for around town. It takes about eight hours to charge through a 240V 13Amp plug, less through a higher voltage system.

BMW’s tests found that users enjoyed the convenience of home charging as it meant not having to join a queue at a petrol station. The car is a prototype and although it looks like a Mini Cooper it has no rear seats which make it impractical as the trails proved with drivers criticising the lack of space.

On average, a day’s single car journey around town is 8.6 miles. In the trial, the Mini drivers were averaging 8.5 and so for daily use, its fine. The Mini E will never go into production but is providing useful data for BMW’s Megacity electric car which is due to go on sale in 2013. So are electric cars the future?

Ultimately, the biggest factor for electric cars will be a charging infrastructure, which doesn’t exist at present. This means closer co-operation with energy suppliers.

“In the past there wasn’t much interaction between car makers and energy companies, now there’s a real sense of co-operation and its essential in terms of standardisation. We need to have common answers around a charging infrastructure and a standardised plug and if we don’t talk to energy companies we won’t be able to do this work on our own” Mr Schmidt added.

Finally, what about price? In the trial, 44% of the drivers would pay up to a third more for the electric version over the conventional car, pricing the car at around £16,000.

So what does the future hold? “Potential”, said Mr Schmidt, who believes now is the “critical years” of development and that the government has an important role to play in supporting these industries. The process, admits Mr Schmidt, is not quick or straightforward. “The technology itself is revolutionary, but the path to adoption will be evolutionary.”