Greenpeace says it can stall drillship for a month

Two Greenpeace campaigners who are currently preventing an oil platform from leaving Scotland by hanging on to its anchor chain claim that they can maintain their protest for a month. […] 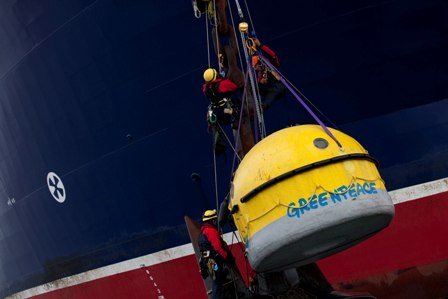 Two Greenpeace campaigners who are currently preventing an oil platform from leaving Scotland by hanging on to its anchor chain claim that they can maintain their protest for a month.

The campaigners, who launched their action yesterday morning, have attached a purpose-built reinforced ‘survival pod’ to the anchor chain and say they now have the means to continue their occupation for a month.

Greenpeace boats towed the two metre pod to the Stena Carron drillship, anchored off the Shetland Islands. The two climbers who spent last night hanging above the waves in a tent suspended by ropes from the anchor chain, then attached the pod to the chain before it was lifted into place.

The rig, operated by US energy giant Chevron, was meant to be sailing for a site in the Lagavulin oil field before drilling an exploratory well in 500 metres of water in the Atlantic Frontier off Shetland.

The deployment of the half-tonne survival pod comes the day before environment ministers from countries bordering the North-East Atlantic meet to discuss a German proposal to ban new deepwater drilling.

One of the activists is Leila Deen, who will today spend her 31st birthday in the pod. She said: “An oil spill here would be a disaster and just as difficult to plug as the BP well in the Gulf of Mexico, but the government has so far refused to stop issuing permits for ships like this to drill. So that’s why we’re in this pod, equipped with supplies to last for a month. We will continue to block risky oil exploration until the government puts a moratorium on new deep sea drilling.”

Throughout the course of its action Greenpeace has been in contact with the Stena Carron‘s captain, Chevron and police.