Energy Secretary Chris Huhne today warned that “an energy crunch is coming” and its scale and impact “could rival the credit crunch”. And he added that “if we are still […] 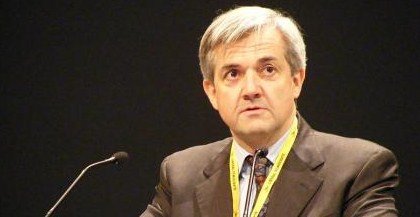 Energy Secretary Chris Huhne today warned that “an energy crunch is coming” and its scale and impact “could rival the credit crunch”.

And he added that “if we are still hooked on oil, there will be no bailout”.

Mr Huhne was delivering a speech to the TUC’s annual climate change conference, and he used to opportunity to call on unions to get on board with the fight to cut carbon.

“Unions should represent the industries of the future, not the past,” he said. “Short-term protectionism cannot triumph over the long-term health of our economy – or our planet.”

“And there’s another important role for unions,” added Mr Huhne. “It speaks to one of your traditional strengths: advocacy. Bringing members and stakeholders together, to explain the size of the task ahead and create a more constructive dialogue.

“We need people to engage with the scale of the challenge, so that the unthinkable becomes credible. Unions can play a part in broadcasting the benefits of the low-carbon transition. Not just in terms of jobs and skills, but making the wider case for change – including on the international stage.

He said that for the UK to meets its renewables targets, “we’ll need new infrastructure that rivals the great 20th century civil engineering projects. It’s estimated that offshore wind could employ an extra 70,000 people by the end of the decade, in a market worth £6bn.

He said that to hit these targets required not just capital investments, but an investment in people. “I will make the case to businesses and employers that career development will be critical to ensure jobs created by green growth aren’t one-shot wonders.”

She said: “Our economy is slowly emerging from recession and continued investment in green technology is essential if this progress is to be maintained. Cutting green funding in the Spending Review would not just risk economic recovery, it would also mean many lost opportunities to create green jobs and develop technologies that could reduce our carbon emissions and save businesses and taxpayers billions of pounds.

“The market alone won’t deliver the low carbon changes the UK needs that’s why we must get a Green Investment Bank up and running. Once set up this could provide affordable capital to low-carbon projects and encourage institutional investors to use the huge pool of capital at their disposal to support green growth.

“Only with a smart, active state pursuing an intelligent, green industrial strategy will the UK be able to achieve its just transition to a low-carbon future.”