MPs, campaigners and key figures in the renewables world were supporting the Renewable Energy Association yesterday in its call on the government to honour the introduction of the Renewable Heat […] 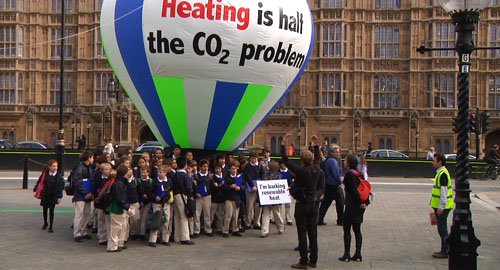 MPs, campaigners and key figures in the renewables world were supporting the Renewable Energy Association yesterday in its call on the government to honour the introduction of the Renewable Heat Incentive.

Standing in front of a balloon filled by power from a solar panel, with a sign reading ‘Heating is half the C02 problem’, the REA, Greenpeace and Friends of the Earth were joined by several MPs championing the cause.

Gaynor Hartnell, chief executive of the REA told ELN: “We want to remind the government that there was support from all parties before the change of government. To change something that has only been in place for a handful of months would be a very undermining signal to send.”

Heating is responsible for 47% of the UK’s climate changing emissions, mostly from heating in homes and workplaces. The coalition hasn’t yet made it clear if the RHI will still remain, even though DECC has said the government backs the scheme. Its future will not be known until next week’s comprehensive spending review.

Labour’s new Shadow Energy Secretary Meg Hillier lent her support to a sign backing the RHI but refused to answer any questions. However Caroline Nokes, Tory MP for Romsey and Southampton North, was vocal: “We really need to get a grip on the impact that we’re all having as individuals, in local government and central government and heighten awareness on what we can all do to reduce our personal impact. You only have to walk in to Westminster today and feel the temperature in there – the heating seems to have gone on, on the first of October.”

Millionaire Tory Zach Goldsmith, MP for Richmond Park, has a track record in green issues. “I don’t think we can achieve what we need to achieve without a renewable heat incentive. We need to see a rapid shift towards a renewable heat program,” he said.

The support on show for the REA from MPs was clear, which will put pressure on the current government to keep its promise of installing Renewable Heat Tariffs by April 2011. Mrs Nokes added: “The spending review is going to be tough times for all of us but in cutting the deficit we can’t lose sight of our environmental and climate change goals.”

Robert Hokin, chief executive of ecoConnect, a support group that helps green technology focused businesses, told ELN: “Any delays into the timeframes damages consumer, investor and business confidence. Anything that damages that is bad for the economy. Predictability is important for businesses.”