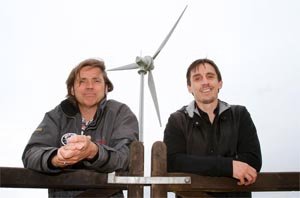 Green energy company Ecotricity’s fleet of 52 windmills will match all the power used at Old Trafford during the game.

This is part of a new initiative, called Sustainability In Sport, which the England and Manchester United player says is aimed at spreading the eco message to a new audience.

Mr Neville said: “Sustainability in Sport and I are looking forward to working on this initiative with [Ecotricity founder] Dale Vince and Ecotricity who are pioneers in this arena and that for me personally makes it very exciting.”

The defender is no stranger to green issues, recently getting the go-ahead to build what the press has christened a “Teletubbies” eco-home.

He added: “I have recognised in the last two to three years the need to make personal changes in my life and reducing my environmental impact is going to be a five year transition for me and my family, but with planning permission for my new eco home being granted and my association with wind turbines, I’m on track to complete this journey.”

Dale Vince OBE, added it that sport was “a new frontier” he was keen to explore: “This new partnership is so exciting. We’re kicking off with a wind powered testimonial but that really is just the start.”

Sustainability in Sport will work on a set of environmental projects the first of which will be a community solar scheme in Manchester using Mitsubishi solar panels.