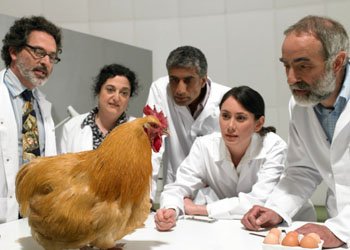 A farm in Hereford has set a sustainable standard for its neighbours by recycling animal waste through anaerobic digestion to power their buildings and sell surplus energy back to the grid.

Great Ynys Farm, which has 90,000 broiler chickens will use anaerobic digestion (AD) to convert chicken litter into biogas for renewable electricity and heat generation, with a 90% surplus sold back to the National Grid, while the captured waste heat will provide warmth for the chicken houses.

The AD system will have capacity to process 700 tonnes of poultry litter and 1000 tonnes of cattle slurry, mixed with 3000 tonnes of maize silage per annum. The use of maize reduces nitrogen levels in the digestion.

The combined heat and power system from ENER-G will provide 250kW of electricity and 200kW of heat. The project will qualify for financial payments from the government’s Feed in Tariff and Renewable Heat Incentive programmes-14 pence per kW on all electricity generated and 6.5 pence per kW for the captured heat that is used on site.

Susan Shakesheff, Director of Ynergy who contracted ENER-G, said: “We are proud to be at the forefront of the move to anaerobic digestion, and to improve our sustainability, and energy self sufficiency, while securing a new income stream. We are able to find a superior alternative for utilising our chicken litter and are helping neighbouring dairy farmers to recycle their cattle slurry.”

Government financial incentives exist for anaerobic digestion: Renewable Obligations Certificates, Feed-in-tariffs, and the Renewable Heat Incentive, which is expected to be introduced on 30 September 2011.