The UK’s new nuclear power programme reached an “important milestone” today as designs for two new nuclear reactors were provisionally accepted by safety and environment regulators. The Office for Nuclear […] 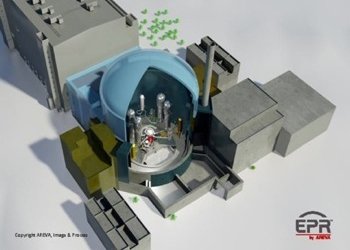 The Office for Nuclear Regulation and the Environment Agency granted “interim acceptance” to the generic designs for both EDF and AREVA UK’s EPR reactor (pictured) and Westinghouse’s AP1000 reactor.

It has taken at least four years and more than 60 engineers, scientists and regulators to go over plans for the reactors – the Generic Design Assessment (GDA) – with a fine tooth comb.

Kevin Allars at the Office for Nuclear Regulation said: “We have reached an important milestone. This interim acceptance confirms that all the plans on how the industry will resolve the outstanding issues are in place. It is for the designers now to satisfy us that they have resolved these issues. We will not allow industry to build the reactors until they have done so.”

The next step is for designers to smooth out final kinks before the reactors can be built.

Alain-Pierre Raynaud, chairman of AREVA UK said: “We have already closed out a number of the outstanding issues and look forward to satisfying the regulators on any remaining questions, including those raised by Fukushima.”