Two turbines have been installed on the River Thames and will generate electricity to power Windsor Castle. The two forty-tonne Archimedes screws, the largest in the UK, will generate 300 […] 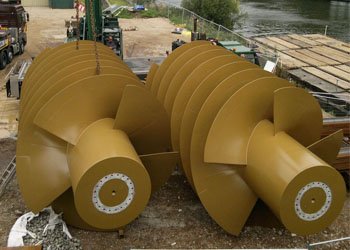 Two turbines have been installed on the River Thames and will generate electricity to power Windsor Castle. The two forty-tonne Archimedes screws, the largest in the UK, will generate 300 kilowatts of energy every hour for up to half of the royal residence.

The project, which will cost developers Southeast Power Engineering Ltd around £1.7m can send excess energy to the grid, should the Royal residence not need it. The project has been in the pipeline for over four years and was originally in Big Six provider npower’s sights.

Brian Crofton, Jackson Civil Engineering Contracts Director said: ” Hydropower definitely has a place in the UK’s future energy mix. From an engineering point of view, this project is fantastic; it is always good to see our industry being involved in new projects like this where we are combining innovation with existing assets on our rivers to create renewable energy for the future.”

The Environment Agency has approved the design as the turbines will not affect the river in a negative fashion and a passage for migrating fish could encourage more diverse wildlife in the area.