So tomorrow marks the end of a momentous year in the energy sector. In 2011 we have had the publication of two major pieces of legislation, the Electricity Market Reform […] 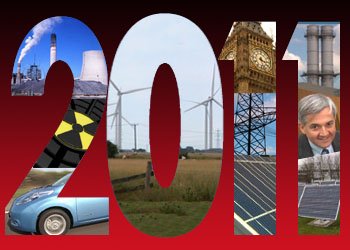 So tomorrow marks the end of a momentous year in the energy sector.

In 2011 we have had the publication of two major pieces of legislation, the Electricity Market Reform act as part of a new Energy Bill due to be published next Spring and just a month ago the biggest reform of the water sector in 25 years with the Water White Paper. We’ve had nuclear disaster in Japan, huge backtracking over renewables targets and the CRC, Ofgem and the politicians getting tough with the Big Six. There’s also been real growth in electric vehicles, a change of Shadow Energy Secretary not to mention ending the year with a massive on-going row over the cuts to solar feed-in tariffs.

Phew, that’s just the things I can remember off the top of my head!

Indeed 2011 has been a very significant energy year. The coalition’s first full calendar year saw them push ahead with a reform of the power markets in a manner not seen for a generation. The UK was said to be moving to a low carbon future, coal and other fossil fuels were the “enemy” as the Government set forward a Carbon price floor and set about taxing the highly polluting industries. But by the end of the year the Chancellor had caved in and offered exemptions and financial relief for the major energy users after dire warnings about the state of the economy.

Our nuclear renaissance got a bit of a kicking as the safety scares following Fukushima meant many countries turned their back on nuclear energy, some like Germany decided to abandon it all together. The UK was forced to prove its new nuclear programme was safe with a six month review by Dr Mike Weightman concluding all systems were go and last month EDF’s Hinckley Point B station got the preliminary planning go-ahead.

Wind and renewables had a turbulent year in many ways, much was made of vast sums invested in offshore wind and technologies, ministers turned up at various events backing the industry. But by the end of the year the UK Government had back tracked by cutting its CO2 targets compared with Europe and admitted the vast costs of wind farms could be a long term barrier to investment. The huge success of the solar FiT scheme was a real crowd pleaser for the green sector but even that caught the Government off-guard as they realised it was unsustainable. A halving of the rate before the end of a consultation period left the Tory leader of the Climate Change Committee fuming and Climate Change Minister Greg Barker squirming.

Business got it straight between the eyes with the final admission by Energy Minister Charles Hendry that for all its high ideals the CRC was simply a tax and smart metering took off in a big way. Businesses were told there would be help with energy efficiency measures with funding from the Green Investment Bank, but by the end of the year there was still no sign of where, when and how it would operate.

There were significant oil strikes in the North Sea and Shale gas was lauded as the answer to our short term energy needs, even though some thought it might have caused a mini-earthquake in Blackpool! Coal had a brief moment in the limelight with an admission that it was still going to be the major source of energy for the best part of this decade.

Turbulent money markets and the Arab Spring meant energy prices bounced all over the place as the wholesale price of oil and gas mushroomed and EU Emissions trading was halted after fears of a scam.

The end to door-step selling, severe reprimands for pricing and confused billing structures as well as an all round criticism of “fat cat” attitudes left the Big Six bruised. Ofgem finally said it would get tough and did so with huge fines for British Gas and the National Grid as well as hauling all the Chief Executives in front of committees and even the PM in an attempt to stop energy bills rocketing.

The Nissan Leaf was just one of many EVs to hit the road and the car showrooms and by the end of the year even the greener Boris Bus had its first outing on the streets of London as the move to low carbon transport got motoring in all ways.  Finally, the year ended with the first stage, of the first step to a potential CO2 global target being agreed at COP17 in Durban (Let’s check the fineprint on that one!).

When you look back on it these are just some of the major highlights of 2011, I’m sure I’ve missed lots out but it shows how ever changing this sector is. As 2012 dawns its clear energy will still be the subject dominating the headlines, it will be the boardroom issue exercising minds, it will be the power to rebuild our economy and literally get us moving.

Clearly we’ll be busy over the next 365 days too!

Happy New Year from myself and the rest of the ELN team,  Sumit.