Is liquid air storage the answer to unreliable wind?

Engineers believe they have found an answer to the unreliability of wind power: liquid air storage. The Institution of Mechanical Engineers (Imeche) is unveiling the unique new British technology in […] 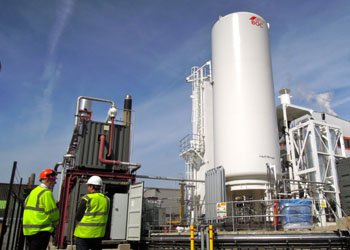 Engineers believe they have found an answer to the unreliability of wind power: liquid air storage. The Institution of Mechanical Engineers (Imeche) is unveiling the unique new British technology in London tomorrow.

The Liquid Air Energy Storage (LAES) takes electricity from the grid at peak times, such as on windy days, and uses it to cool air until it liquefies at -196 degrees Celsius.

The liquid air is then stored under pressure until it is needed, when it is brought to a normal temperature and turns back into gas. It expands by 700 times, rushing through a turbine which creates electricity to feed back to the grid.

Highview Power Storage, which has been developing the technology for five years and now has a large-scale pilot project connected to the grid, believes their product could plug a serious gap in the market.

Toby Peters, co-founder and chief operating officer of Highview Power Storage said: “We identified this as the big gap in the market and today we are now seeing urgent demand for a large scale energy storage which can be deployed where pumped hydro is not viable.”

The technology could create thousands of jobs in the future, added Dr Tim Fox, Head of Energy at Imeche: “The energy storage market could be worth over $100 billion (£63bn) over the next decade and create over 100,000 jobs. These are jobs which the UK sorely needs.”