It’s full steam ahead for “green growth and green jobs,” according to DECC’s new Energy and Climate Change Secretary Ed Davey. On his first official visit as a Cabinet member, […] 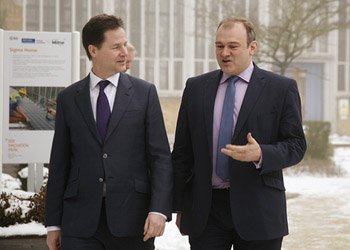 Mr Davey declared his priorities in the role are “very simple: green jobs, green growth and getting the best deal for energy bill payers.”

The new Energy Secretary, who takes over from Chris Huhne after his resignation on Friday, said: “There may have been a change at the helm, but there’ll be no change in direction or ambition.

“I have long believed in the need to marry our economic and environmental agendas… By focusing on the low carbon industries of the future we can rebalance our economy, reducing our dependence on the City of London on the one hand and on oil and gas imports from unstable parts of the world on the other.”

The Deputy Prime Minister made it clear he would back his fellow Lib Dem’s stance. He said: “The race is on to lead the world in clean, green energy. Last year we saw record-breaking global investment in renewables – outstripping the cash piled into fossil fuels. The new economic powerhouses – China, India, Korea, Brazil – are now serious contenders for that capital.

“So the choice for the UK is simple: wake up, or end up playing catch up.”