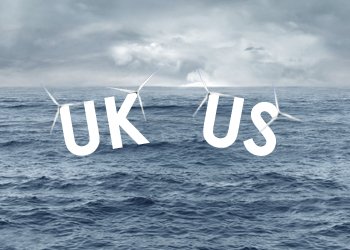 Floating wind turbines are uniting Britain and the United States as they agree today to collaborate in developing the new floating wind technology.

The turbines are designed to generate power in deep waters currently off limits to conventional turbines but where the wind is much stronger.

The deal kicks off a week of talks about clean technology, as both countries lead international meetings in London this week about accelerating the deployment of clean energy.

Alongside the talks, Ed Davey will sign a number of bilateral agreements with counterparts from other governments to work in collaboration over the coming years.

The UK and US will agree to collaborate in the development of floating wind technology designed to generate power in deep waters currently off limits to conventional turbines but where the wind is much stronger.

“The UK and US are both making funding available for this technology and we’re determined to work together to capitalise on this shared intent.”

Mr Davey added Britain has more wind turbines installed around its shores than any other country in the world. He said the new designs will avoid the expense of foundations down to the seabed or having to undertake major repairs out at sea.

The United States’ Department of Energy has already recently announced a $180m (£112m) funding opportunity for up to four demonstration projects in US waters – which potentially could include a floating wind demonstration.