Drax Power Station says it is a month away from completing the largest steam turbine modernisation programme in UK history. The project to cut its carbon dioxide emissions by one million […] 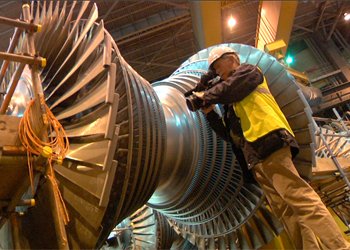 Drax Power Station says it is a month away from completing the largest steam turbine modernisation programme in UK history. The project to cut its carbon dioxide emissions by one million tonnes a year has taken five years to complete and cost £100 million.

Drax says this will strengthen the power plant in Yorkshire’s position as the most efficient coal-fired power station in the UK.

Peter Emery, Production Director at Drax said: “The completion of this project makes our turbines amongst some of the most efficient in the world and its successful completion is due to our excellent collaborative relationship with Siemens in Newcastle and Germany.

“As the UK’s largest coal-fired power station, we take our responsibility to cut carbon emissions seriously and this project marks a significant milestone in our efforts to do that.”

The new turbines, manufactured by Siemens Germany, consist of 28 separate turbine rotors weighing more than 2,800 tonnes and over 80,000 individualised turbine blades, which laid end-to-end would stretch the distance of the London marathon.