‘Bigger is better’ for wind turbines

The bigger the turbines, the better it is for the environment, according to a new report by Swiss researchers. The study, which includes the analysis of 12 land turbines measuring […] 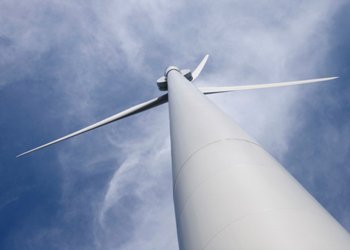 The bigger the turbines, the better it is for the environment, according to a new report by Swiss researchers.

The study, which includes the analysis of 12 land turbines measuring up to 300ft, found larger turbines are more environmentally friendly and produce greener electricity.

The researchers claim this is because manufacturers now have the knowledge, experience and technology to build big wind turbines with greater efficiency. They say more advanced materials also allow the turbines to increase in size, capturing more wind but without increasing in mass. This saves the construction materials by reducing the number of total turbines needed to produce the same amount of power.

The findings come as UK ministers suggested taxpayers could stop subsidising onshore wind farms and solar power providers by the end of the decade. Wind, which now provides about 2% of global energy needs, is expected to rise as high as 10% by 2020.

The study was published in the American Chemical Society journal Environmental Science & Technology.