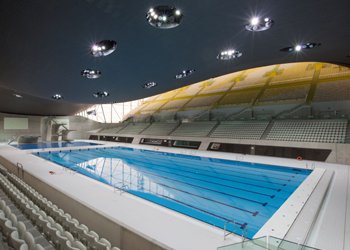 Team GB may have missed out on a gold medal at the Olympic aquatic sports centre this summer – but the venue itself has been given top rating for its environmental credentials.

According to the London-based Environmental Investigation Agency (EIA), the swimming centre has environmentally friendly cooling systems which should set an example for Games of the future.

Refrigeration and air-conditioning are a major source of greenhouse gas emissions, partly through the use of synthetic refrigerant chemicals called hydrofluorocarbons (HFCs) which are often thousands of times more potent than carbon dioxide.

But the Aquatic Centre in London which was designed by Zaha Hadid, uses ammonia one of a number of ‘natural’ refrigerants that have either no or low global warming potential.

Alasdair Cameron, Global Environment Campaigner at the EIA said: “It is fantastic to see the London Olympics waking up to the need to use environmentally friendly refrigerants as a means of reducing its carbon footprint, but this is just the start.”

However other venues aren’t such environmental champions, he said, as the Olympic Stadium and media centres rely on HFC-based equipment.