Greenpeace has finally ended its five-day protest at an Arctic oil rig. The campaign group had been trying to stop Gazprom from starting to drill for oil in the Pechora Sea off […] 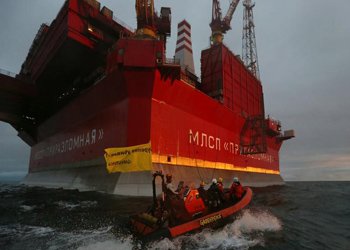 Greenpeace has finally ended its five-day protest at an Arctic oil rig.

The campaign group had been trying to stop Gazprom from starting to drill for oil in the Pechora Sea off the north west Russian coast.

On the last day of the protest a Greenpeace speedboat carrying campaigners capsized as it tried to stop a ship docking at the Prirazlomnaya platform. As the activists attached their speedboat to the mooring line between the ship and the rig, the boat capsized as the line tightened. Both the boat and crew were recovered unharmed.

The Prirazlomnaya rig is the first permanent oil platform in the offshore Arctic. The Greenpeace campaign began last Friday with a 15-hour occupation of the rig by climbers.

Kumi Naidoo, Executive Director of Greenpeace, told the Moscow Times the activists’ actions had “delayed efforts here by a couple of days”, adding: “We must hope that buys us more time to continue our campaign on land.”

Naidoo said an online petition supporting a ban on mineral exploitation in the Arctic had gathered signatures at the rate of seven per second since the start of the Greenpeace action.

Greenpeace has promised further action against Gazprom and other energy companies such as Shell and Statoil who are planning to access new oil and gas deposits in the Arctic region.

However, analysts doubt either Gazprom or the Russian government will change their exploration policy as the country needs to find alternative energy supplies to the Siberian fields where oil production has already peaked.