Conservative party heavyweight David Davis today criticised the Government’s energy policy by laying into plans for the carbon floor price, which is meant to be a lynchpin for reforms of […] 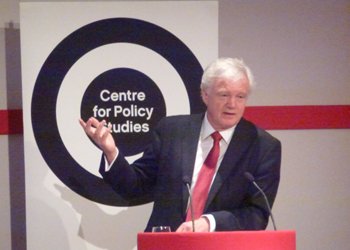 Conservative party heavyweight David Davis today criticised the Government’s energy policy by laying into plans for the carbon floor price, which is meant to be a lynchpin for reforms of the electricity market.

Declaring “Our energy policies have become the enemy of competitiveness and growth”, the one-time contender for Tory Party leadership suggested the key mechanism of the new Energy Bill should be scrapped.

The carbon floor price will kick in from April next year, putting a levy on every tonne of carbon emitted by businesses.

In a keynote speech on behalf of the influential right-leaning thinktank Centre for Policy Studies and the Institute of Chartered Accountants in England and Wales (ICAEW), Mr Davis argued it will push jobs and money abroad because it will only apply in the UK.

Mr Davis said: “For Britain’s energy intensive industries, which employ 600,000 workers and contribute £50 billion a year to our economy, this [carbon floor price] will be hugely damaging.

“For these companies energy is always a major part of their expense and sometimes a majority of their costs.  According to the Government’s own figures, energy intensive businesses – like steel and ceramics producers – could see electricity costs rise by up to 52% by 2020.”

Mr Davis suggested green is one of the key reasons why the UK will lose out on business to cities like “Frankfurt, Rotterdam, Milan and Marseille”.

He added: “If we want low carbon power then we should certainly accelerate plans for next generation nuclear power stations.  In the meantime we should scrap green policies which inflate business’ energy costs today, and drop plans for new policies which could do so tomorrow.”

The criticism could prove a massive headache for Lib Dem Energy Secretary Ed Davey as he steers the Energy Bill through its final stages. It follows months of wrangling between the Coalition partners over UK energy policy.

Several suppliers have also raised doubts about whether the carbon floor price will give the right investment signals, while environmentalists sneer at the carbon price as a hand-out for nuclear power.