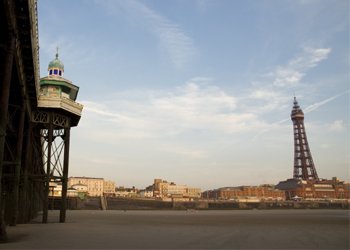 A Lancashire man who has apparently changed his name by deed poll to ‘Frackman’ is walking from Blackpool Tower to Downing Street to demand a halt to fracking for shale gas.

Setting out from the Tower on Friday morning, he plans to hand in a petition to raise his concerns about fracking in densely populated areas of the United Kingdom.

Gayzer Tarjanyi, 51, from St Annes, Lancashire will be asking everyone he meets along the way to sign a petition calling for a moratorium on fracking in the UK.

A founder member of anti-fracking group, Frack Free Fylde, Frackman plans to walk to as many fracking sites as possible. He expects to arrive at Downing Street on October 20th.

The protestor who according to his Twitter and Facebook profile is a DJ and family entertainer said: “The most important issue we face is the lack of an effective regulatory system and we are calling for a moratorium until proper regulation is in place and the global evidence of the risks involved can be properly assessed.”

He told ELN in a phone call: “I believe when the facts get out people will oppose fracking.”

Engineers at the Institute of Mechanical Engineers have said they believe there is a safe method of extracting shale gas with a proper regulatory framework in place.

However asked whether he would back shale gas if it were proved environmentally sound, Mr Tarjanyi replied: “It’s never going to be. If maybe there was a way of fracking without chemicals… but 30% of wells degrade within 10 years.  There are 842 wells in the UK. It’s never been done in such a condensed area in the world before.”

Fracking or hydraulic fracturing is a process which blasts a mix of water, chemicals and sand deep underground to force open cracks in shale rock, allowing trapped gas to flow out freely.