Scores of people gathered outside the Treasury in London yesterday to tell George Osborne “Green is working”. Holding up banners with that slogan and wearing green hard hats, the protestors […] 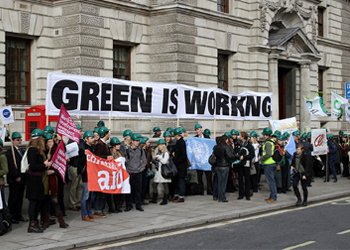 Scores of people gathered outside the Treasury in London yesterday to tell George Osborne “Green is working”.

Holding up banners with that slogan and wearing green hard hats, the protestors said they wanted to show the Chancellor that strong climate and energy policies are good for jobs and people. Another banner read, “One Million Jobs Already”.

The stunt attracted 250 people, according to the organisers Stop Climate Chaos, a coalition which represents more than 100 organisations and 11 million supporters.

It came on the same day the Chancellor was criticised for calling environmental NGOs and green energy supporters “environmental Taliban”.

The group has taken out adverts on the London Underground and plans to campaign throughout autumn to “make sure politicians take two key opportunities to deliver on the Climate Act and stand by our growing green economy”, according to their website.

They want climate targets included in the imminent Energy Bill and greenhouse gas emissions from international aviation and shipping to be counted in the UK’s carbon targets.