A group of pensioners and disabled people protested at a London shopping centre over the weekend in despair at the rise of fuel poverty among vulnerable Brits. Fuel poverty is […] 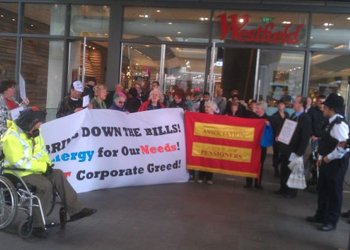 A group of pensioners and disabled people protested at a London shopping centre over the weekend in despair at the rise of fuel poverty among vulnerable Brits.

Fuel poverty is officially defined as when homes spend 10% or more of their income on heating.

The “Warm Up” protest at the Stratford Westfield centre, organised by the Greater London Pensioners’ Association, saw pensioners join forces with disabled activists from Disabled People Against Cuts to defy security and police by holding up signs and boards such as “WE WANT TO EAT AND KEEP WARM” on Saturday lunchtime.

Betty Cottingham from the GLPA said: “The Greater London Pensioners’ Association are extremely concerned at the thousands of preventable deaths in this country which are attributable to the cold and outraged at the continuing weak response of the government. Even at “lower” tariffs, bills are still unaffordable.”

The protestors used the day to launch a new petition demanding the government reinstate the Winter Fuel Allowance in full. Some academics have suggested last winter, 65 people died every day because of cold homes – three times official estimates.