Protestors who scaled the chimneys of a new Nottinghamshire gas plant to raise concerns over a “dash for gas” have been drubbed for wasting more than £200,000 of taxpayers’ money. […] 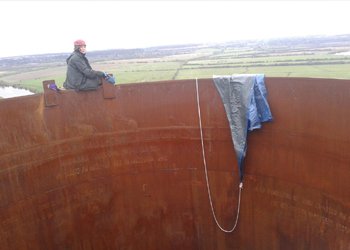 Protestors who scaled the chimneys of a new Nottinghamshire gas plant to raise concerns over a “dash for gas” have been drubbed for wasting more than £200,000 of taxpayers’ money.

Early yesterday morning police were called to the scene when around 20 activists climbed the outer walls and abseiled down the inside of two enormous smokestacks at the West Burton gas power station. They plan to occupy the chimneys all week.

French supplier and owner of the plant EDF Energy was forced to shut down the plant, which is meant to officially open this week, when the protestors from campaign group No Dash For Gas began camping in the flue.

Ewa Jasiewicz, one of those camped on the rim of the chimney told ELN: “It’s part of our protest against the Government’s dash for gas, it’s not just about EDF. It’s about a wider policy by the Government to focus on fossil fuels at a time when we absolutely need to be moving away rapidly into renewable energy.”

The protestor suggested peoples’ energy bills would be cheaper if the UK wasn’t dependent on gas, pointing to rising wholesale prices.

When quizzed about who would pay for the upfront cost of renewables, she said: “The Government can play its role in that.If you’re looking at how much the Government’s spent in bailing out the banking system there’s clearly money there also the energy companies that have made these massive profits.”

Nottinghamshire Police are on the site to ensure the safety of staff and protestors but said their presence is “coming at a heavy price to the tax payers”.

Paul Broadbent, the Force’s Assistant Chief Constable said: “We have no choice but to police the protest… That is already proving a drain on police resources – and if the current staffing levels are maintained day and night for the next week, that will cost in the region of £200,000 – excluding petrol, overtime payments and other factors.

“Of course people have a legal right to protest – but they must do that lawfully. In trespassing into the power station, scaling chimneys and effectively taking up residency, the demonstrators have acted illegally.”

The protestors plan to hand themselves over to police, said Ms Jasiewicz.

EDF said the protest will not affect supplies to energy users in the area or to the national grid, adding in a statement: “We support the right to peaceful protest. However, any unlawful action is of serious concern and puts at risk the safety of the individuals involved. Our site management and security teams have taken the appropriate action in protecting the safety of the public, personnel and plant.”

But furious local MP John Mann slammed the protestors as “self-indulgent city-dwellers”. He said: “This is a quarter of a million pounds that could have been spent on positive environmental initiatives such as solar panels and ground source heating for pensioner bungalows.”

Environmental campaigner George Monbiot hailed the protest on Twitter for highlighting “useless CO2 policies” but others on Twitter took a swipe at the action, with one writing: “The electricity not generated today is replaced by coal. More CO2 as a result. Thanks for the own goal”.

There is a coal plant next to West Burton which EDF said was unaffected by the protest.

It may not be the last time a power plant is occupied as the No Dash for Gas group tweeted yesterday: “We’ve occupied 2 of the chimneys at the new West Burton gas power station. One of the first in the governments new dash for gas. Stay tuned”.