A Conservative MP has been accused of a secret plot to sway energy policy against wind farms. In an undercover investigation, the campaign group Greenpeace filmed interviews in which MP […] 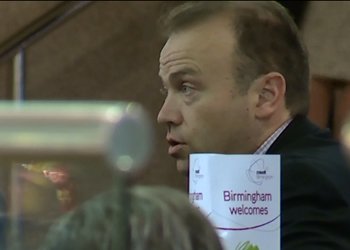 A Conservative MP has been accused of a secret plot to sway energy policy against wind farms.

In an undercover investigation, the campaign group Greenpeace filmed interviews in which MP for Daventry, Chris Heaton-Harris suggested he could influence energy policy. Greenpeace also suggests the MP was part of a co-ordinated challenge to the Climate Change Act.

In the environmental activist group’s mini documentary, footage shows undercover investigators meeting with Heaton-Harris (pictured) and other Tory parliamentarians, by pretending to be part of a fake anti-renewable energy group called Windefensible.

Mr Heaton-Harris who organised a letter to the Prime Minister from more than 100 MPs against spending on onshore wind earlier this year, tells the undercover investigator in October: “I’m trying to write it [opposition to wind power] into the DNA of the Tory Party.”

This seems to run counter to the Conservative Party’s Coalition pledge to be the “greenest Government ever”.

In a bizarre twist, it also seems the Tory MP suggested writer and anti-wind commentator James Delingpole stand in the Corby constituency by-election, running against a Conservative candidate, to push the anti-wind agenda into the public gaze. This succeeded with the writer appearing as a guest in several television interviews.

Greenpeace executive director John Sauven said: “This investigation reveals how Britain’s energy future is at risk of being hijacked by a militant faction of climate sceptic and anti-wind MPs on the radical right of the parliamentary Conservative Party. The Tories’ campaign manager for this week’s by-election is so opposed to clean energy that he appeared willing to betray his own party and challenge the authority of the Prime Minister to promote his cause.”

But the Tory MP brushed off claims of a “secret plan” as merely political “bragging” on his behalf.

Heaton-Harris said in a statement today: “The quotes attributed to me range from factually correct statements to me bragging about things beyond my control, which has so often before been the failing of politicians. The implication that I choreographed any sort of ‘secret plan’ is simply not the case and I apologise if that is the impression given.”

The apology wasn’t enough for some, with Friends of the Earth calling on the Prime Minister to “stamp out plots” and “stand up to maverick elements in the Conservative Party who want to destroy” the Climate Change Act.

Also fingered in the Greenpeace video is newly appointed Energy Minister John Hayes, who has a history of anti-wind statements and recently told ELN his position on the energy source had “hardened” since taking on the new role.

In the Greenpeace video, another politician, Peter Lilley MP appears to tell the undercover investigator John Hayes will “duff up” his senior colleague, Energy Secretary Ed Davey, on wind power.

The Conservative Party would not comment on the allegations.

The wind industry has demanded David Cameron get a grip on policy or risk undermining the whole energy sector.

Maf Smith, the Deputy Chief Executive of trade body RenewableUK warned: “It is now critical that Mr Cameron stops this policy brinkmanship and sends a clear message to all investors that his Government is absolutely committed to providing stability for the entire energy sector – otherwise investment could be lost in all forms of power generation – not just in renewables.”