The Prince of Wales officially opened the UK’s first commercial-scale gas-to-grid plant yesterday. Located in Rainbarrow Farm, Dorset, it is a joint venture between local farmers and the Duchy of […] 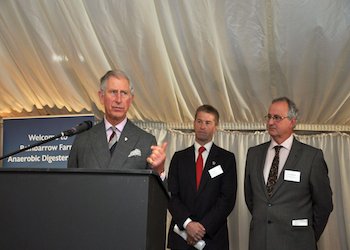 Located in Rainbarrow Farm, Dorset, it is a joint venture between local farmers and the Duchy of Cornwall. It is the first fully operational commercial scale plant in the country to inject biomethane directly into the gas grid.

The plant will use a process called anaerobic digestion (AD) to break down feedstocks such as maize, grass, chocolate and potato waste into biogas. It is expected to generate enough gas to supply up to 56,000 homes during summer and 4,000 homes during winter and net carbon savings of around 4,435 tonnes of CO2 equivalent emissions every year.

Charlotte Morton, Chief Executive of the Anaerobic Digestion & Biogas Association (ADBA) said: “Biomethane – one of the few sources of truly low carbon and renewable gas – is strategically important for the UK economy and energy markets, delivering on the Government’s key objectives for both energy security and economic growth.

“Capable of scaling up fast and cheaply, it (AD) can fill a significant part of the gap left when our existing energy sources are taken offline in a few years’ time, helping to keep the lights on and meet climate change targets.”

According to ADBA’s statistics, AD has the potential to generate around £2-3 billion worth of “green gas” – equivalent to more than 10% of the UK’s domestic gas demand – and support around 35,000 jobs.