American scientists have tested a type of nuclear fission technology which could be used on space flights. It is the first experiment to produce electricity with a nuclear reactor system […] 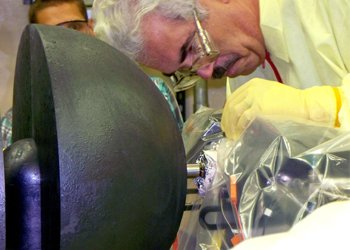 American scientists have tested a type of nuclear fission technology which could be used on space flights. It is the first experiment to produce electricity with a nuclear reactor system meant for space since 1965.

The team from NASA and the USA’s Department of Energy demonstrated the first use of a heat pipe to cool a small nuclear reactor and power a Stirling engine.

A heat pipe is a sealed tube with an internal fluid that can efficiently transfer heat produced by a reactor with no moving parts. A Stirling engine is a relatively simple closed-loop engine that converts heat energy into electrical power using a pressurized gas to move a piston.

The scientists say using the two devices in tandem can create a simple, reliable electric power supply that can be adapted for space applications.

Los Alamos engineer David Poston said: “The nuclear characteristics and thermal power level of the experiment are remarkably similar to our space reactor flight concept. The biggest difference between DUFF and a possible flight system is that the Stirling input temperature would need to be hotter to attain the required efficiency and power output needed for space missions.”

Marc Gibson of NASA Glenn added: “The heat pipe and Stirling engine used in this test are meant to represent one module that could be used in a space system. A flight system might use several modules to produce approximately one kilowatt of electricity.”

NASA’s exploration robot on planet Mars, the Curiosity rover, is partly powered by nuclear. Current space missions typically use the same amount of electricity as one or two light bulbs. Scientists believe the availability of more power could transmit mission data back to Earth more quickly or allow more instruments on a spacecraft to be operated at the same time.