Gas sector not so gushing over Osborne’s strategy 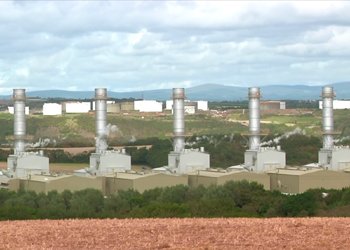 The sector’s response to the Government’s Gas Strategy was less gushing and more of a trickle as engineers said they were “disappointed” there was no sign of new investment in gas-fired power plants.

In his Autumn Statement the Chancellor George Osborne stated yesterday the Coalition would “ensure we make the best use of lower cost gas power, including new sources of gas under the land”, with emphasis on tax incentives for shale gas. However engineers have expressed their worry of the need to get building plants first (such as the new Pembroke gas plant, pictured) – and fast.

While the Institution of Gas Engineers & Managers (IGEM) hailed the country’s opportunity to be “gas self-sufficient for decades” with shale gas, it avoided pinning all the glory on the unproven resource.

Dr Claire Curtis-Thomas, IGEM’s Chief Executive Officer said: “The decision to establish an office for the regulation and management of unconventional gas is to be welcomed and will hopefully be followed quickly by the lifting of the current voluntary drilling embargo at the Cuadrilla sites in Blackpool.

“Despite affirming the future of gas, the Government has not announced any new gas-fired power plants, which is disappointing… Investment of this kind will raise the UK’s profile in the gas sector internationally and make our companies more attractive to foreign investors – all really good news for the thousands of people working in this industry in the UK.”

She also echoed Dr Tim Fox at the Institution of Mechanical Engineers who tweeted yesterday: “Engineers can build anything; #nuclear, #renewables, #gas, but not a time machine if lights go out; time to start building”.

Dr Curtis-Thomas went on: “We are hopeful that the Government will make an announcement on new gas-fired plant soon, which are vital for energy security and to keep Britain’s lights on for the future.”