Traffic congestion costs the UK economy more than £4.3 billion – equivalent to around £491 per car-commuting household. That’s according to a new report from traffic information provider INRIX – […] 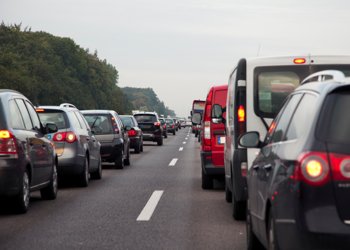 Traffic congestion costs the UK economy more than £4.3 billion – equivalent to around £491 per car-commuting household.

That’s according to a new report from traffic information provider INRIX – whose data is used in sat-nav systems – and the Centre for Economics and Business Research, which claims more than £426 million is wasted on fuel alone, equivalent to around £52 per household.

Around 40% of the gridlock costs occur in London, with commuting drivers spending 66.1 hours a year stuck in jams. The cost of idling in traffic in London is £15.19 compared to the UK national average of £12.51. It also claims individual annual costs per commuting household are highest in London, with gridlocking costing homes around £1003.58 annually in fuel, time and indirect cost of household goods.

Inrix Chief Executive Bryan Mistele said: “Traffic congestion impacts everything from how long it takes us to get to work and the amount of fuel we consume in our vehicles to the costs of food at the grocery store. As the UK continues facing times of austerity and high unemployment, the study indicates the efficient movement of people and commerce across our road networks is essential to fostering a healthy, vibrant economy.”

The report suggests 19% of traffic during the daily commute is business vehicles and as a result more than £1.1 billion “indirect costs” are passed on to British households every year.

Earlier this year, research by the Energy Saving Trust suggested motorists could save around £270 each or 20p off every litre of fuel by driving “smart” and businesses could cut fuel costs by up to £500 million a year by using more fuel-efficient tyres.