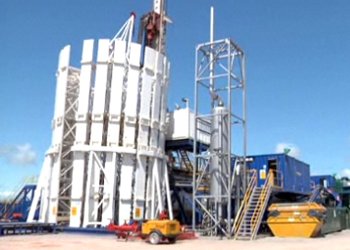 Energy Secretary Ed Davey today lifted a ban on fracking for shale gas in the UK effectively giving the green light to a whole new industry – with a caveat on safety. This has been expected since the Chancellor announced new tax breaks for shale gas last week.

It means developers like Cuadrilla Resources (pictured) will be able to resume their exploratory work in the north of England which was suspended in May 2011 after two small seismic tremors were detected near the country’s only fracking operations in Lancashire.

Hydraulic fracturing extracts gas from deep underground by pumping a mixture of water, sand and chemicals at high pressure into shale rock, which forces open cracks in the rock letting the gas flow out freely.

Taking pains to stress how much research has come before lifting the moratorium, including a public consultation and reports from the Royal Society and Royal Academy of Engineering, the Energy Secretary said: “My decision is based on the evidence. It comes after detailed study of the latest scientific research available and advice from leading experts in the field.

“We are still in the very early stages of shale gas exploration in the UK and it is likely to develop slowly. It is essential that its development should not come at the expense of local communities or the environment. Fracking must be safe and the public must be confident that it is safe.

“We are strengthening the stringent regime already in place with new controls around seismic risks. And as the industry develops we will remain vigilant to all emerging evidence to ensure fracking is safe and the local environment is protected.”

The newly created Office of Unconventional Gas and Oil will regulate the industry, with a new set of rules covering shale gas to avoid future tremors. These include a review before fracking begins to check the seismic risk and whether a site is near any faults; firms must give a fracking plan to DECC showing how seismic risks will be addressed; and seismic monitoring must be carried out before, during and after fracking.

Also a new traffic light system for how strong seismic activity is and direct appropriate responses will be brought in, with a trigger mechanism to stop fracking operations in certain conditions.