British firm BG Group has announced the start of commercial oil production from the Sapinhoá field offshore Brazil. The field is believed to be one of the oil and gas […] 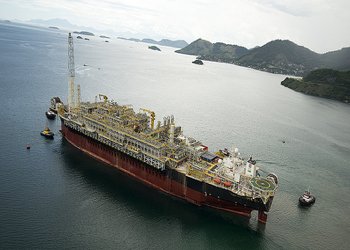 The field is believed to be one of the oil and gas company’s “big five” discoveries in the pre-salt Santos Basin and is expected to pump an initial 25,000 barrels a day.

The Cidade de Sao Paulo floating production, storage and offloading (FPSO) vessel (pictured) is the first unit deployed on the field, which BG Group claims has the capacity to process 120,000 barrels of oil per day and 176 million standard cubic feet of gas per day.

Chris Finlayson, CEO of the company said: “The Sapinhoá field enters commercial production only four-and-a-half years after its discovery, a further demonstration of the excellent progress we are making in developing our world-class discoveries in the Santos Basin. Installation of the Cidade de São Paulo was delivered to schedule and on budget, while a second FPSO on the Lula field (in block BM-S-11) is also on track for start-up later in 2013.

The Sapinhoá field development plan includes a second FPSO, the Cidade de Ilhabela, with production capacity of 150,000 barrels of oil per day and 212 million standard cubic feet of natural gas. It is on track to start production in the second half of 2014.