EDF Energy will supply Network Rail with low carbon electricity to power its rail network under a 10-year deal announced today. Believed to be the “biggest rail electrification programme in […] 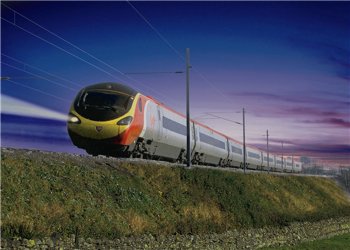 Believed to be the “biggest rail electrification programme in a generation”, the contract will see the energy firm supply 3.2TWh of electricity to Network Rail, which carries around three million passengers and tens of thousands of freight a day.

The majority of electricity supplied will be used to power electric trains, which currently includes 40% of the rail network but could rise to 44% by 2020 as the network aims to electrify more than 2,000 track miles across Britain.

David Higgins, Network Rail Chief Executive said: “Rail is already the greenest form of public transport and this partnership with EDF Energy will help us make it greener still. Our work to electrify hundreds of miles of railway represents the biggest programme of rail electrification in a generation and will provide faster, quieter and more reliable journeys for millions of passengers every week while cutting the cost of the railway.”

Under the agreement, EDF Energy is offering Network Rail the choice to purchase their electricity requirements up to 10 years in advance, which it claims will help deliver greater certainty over costs and significantly reduce exposure to short term, volatile energy prices.

Vincent de Rivaz, CEO of the energy firm said: “Network Rail is the biggest single electricity customer in the UK so this long term deal is a massive vote of confidence in our nuclear-backed energy. Rail is already one of the least carbon intensive ways to travel and the huge investment in electrification will be backed by a stable and affordable supply of low carbon energy. The deal places nuclear energy at the heart of the UK’s infrastructure for the next 10 years and serves to underline that nuclear power is part of everyday life in Britain.”

The firm has also previously won contracts to supply energy for the UK Government, which includes the NHS, Highways Agency and the Metropolitan Police as well as a deal agreed last year to supply the majority of Scotland’s public bodies.