The Scottish Government has pledged to decarbonise its energy sector by 2030 and boost offshore wind in the country. First Minister Alex Salmond revealed the new target of cutting carbon […] 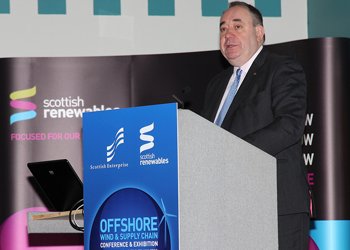 The Scottish Government has pledged to decarbonise its energy sector by 2030 and boost offshore wind in the country.

First Minister Alex Salmond revealed the new target of cutting carbon emissions from electricity generation by 50gCO2/kWh (grams of carbon dioxide per kilowatt hour) by 2030 – suggested by the UK Committee on Climate Change – at a conference in Aberdeen today (pictured). He also announced the signing of new Memorandums of Understanding (MoUs) to support the development of the offshore wind sector, which aims to attract around £100 million worth of investments.

Mr Salmond is calling on the UK Government to follow suit as it failed to set a decarbonisation target in the Energy Bill last year, delaying the decision until 2016.

Mr Salmond said: “We face a global imperative to tackle climate change and how we power our economies is a key part of that. Offshore wind has a strong, vibrant future, with plans to install up to 10GW of capacity in Scottish waters over the next decade.

“However, UK coalition ministers’ mixed messages on energy policy and continuing uncertainty around Electricity Market Reform, including the lack of a decarbonisation target until at least 2016, is undermining confidence and threatening investment by the supply chain. Having stated our ambition for a largely-decarbonised electricity supply by 2030, the Scottish Government is now setting a specific target to guide our overall policy approach and set the context for decisions on applications for electricity generation. We will now consult with stakeholders on the implementation of this ambitious target. I join the industry, again, in urging Westminster to follow suit.”

He added the Scottish Government would also continue to urge the UK Government to ensure its strategy for offshore wind gives the right level of support to the supply chain.

Scotland also aims to generate 100% of domestic electricity use in the country from renewable sources by 2020. Yesterday ELN reported offshore wind developers have contributed a total of £164.5 million to the Scottish economy so far.