Australian researchers have discovered a new material which acts like a carbon ‘sponge’ and could suck in gas emissions from coal power stations. The energy efficient material absorbs large amounts […] 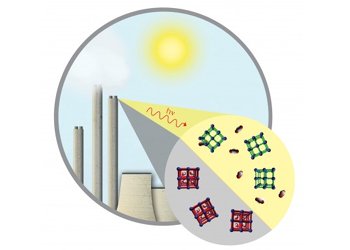 Australian researchers have discovered a new material which acts like a carbon ‘sponge’ and could suck in gas emissions from coal power stations.

The energy efficient material absorbs large amounts of carbon dioxide then releases it when exposed to sunlight, according to the study published this week in Angewandte Chemie, a German chemistry magazine.

Scientists from Monash University and Australia’s national science agency, CSIRO claim they have found for the first time a photosensitive metal organic framework (MOF) – a class of materials known for being able to store gases.

They believe this could be a “powerful and cost-effective new tool” to capture and store, or even recycle, carbon dioxide.

PhD student Richelle Lyndon and lead author of the paper said the process was “just like wringing out a sponge”.

Carbon capture and storage (CCS) is seen as crucial to keep emissions under control while being able to use fossil fuels in power stations but much of the technology is in the early stages.

MOFs are clusters of metal atoms connected by organic molecules. They have an extremely high internal surface area – which could cover an entire football field in a single gram – which means they can store large volumes of gas.

Associate Professor Bradley Ladewig of the Monash Department of Chemical Engineering said their MOF find was an exciting development.

He said: “For the first time, this has opened up the opportunity to design carbon capture systems that use sunlight to trigger the release of carbon dioxide. This is a step-change in carbon capture technologies.”