The growth of hydropower and geothermal energy sources around the world slowed down in 2011 according to a new report released this week. Global installed capacity of hydropower reached 970 […] 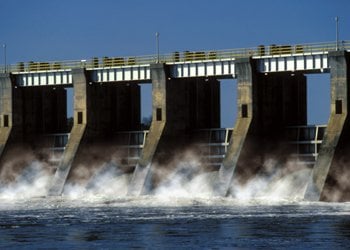 The growth of hydropower and geothermal energy sources around the world slowed down in 2011 according to a new report released this week.

Global installed capacity of hydropower reached 970 gigawatts (GW), only a 1.6% increase from the previous year. Geothermal capacity reached 11.2 GW, with growth slowing to below 1% for the first time since 2002, said the report author. But despite this the market for the two technologies is increasing, according to new research conducted by the Worldwatch Institute.

Countries continue to gobble up hydropower in particular, with consumption reaching 3,498 terawatt-hours in 2011.

Evan Musolino, research associate at the group said: “Despite the recent slowdown in growth, the overall market for hydropower and geothermal power is increasing in part because these two sources are not subject to the variability in generation that plagues other renewable energy sources such as wind and solar.”

He suggested they could be used to provide “reliable baseload power”.

Although hydropower plays the least important role in the Middle East, the region experienced the greatest growth in hydroelectricity use at almost 22%, followed by North America (14%). In contrast usage fell nearly 9% in Europe and Eurasia and 0.6% in the Asia Pacific region, found the report.

As for geothermal, high capital costs such as for drilling wells and a long lead time “continue to challenge developers”, according to the research.