Statoil has been given the go-ahead to drill an oil field, believed to be one of the biggest developments ever in the North Sea. The £4.6 billion Mariner oil field […] 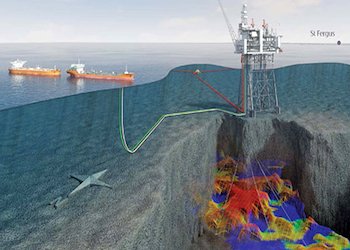 Statoil has been given the go-ahead to drill an oil field, believed to be one of the biggest developments ever in the North Sea.

The £4.6 billion Mariner oil field (pictured) is expected to produce around 55,000 barrels of oil per day at its peak – 5% of Britain’s daily production.

Located on the East Shetland Platform of the UK North Sea, the field will have a floating storage unit of 850,000 barrels of capacity.

Energy Secretary Ed Davey said: “Mariner will be one of the biggest projects ever in the North Sea and the £4.6billion commitment over 40 years from Statoil is a vote of confidence in the future of UK oil and gas. Importantly, unlocking heavy oil production marks a new chapter in development, opening the potential for five per cent of our oil reserves.

“The Government is working hard with industry to ensure North Sea oil and gas continues to provide energy security and jobs. Our efforts to get unused fields into production, a fiscal regime that encourages investment – together with new, advanced technology – is extending UK oil and gas production beyond what was thought possible.”

He added the North Sea is a vital asset and that it provides energy security for the UK and reduces the nation’s reliance on volatile international energy markets.

Statoil aims to start production in 2017 and the field is expected to produce for 30 years.