Prime Minister David Cameron believes ‘green’ business shouldn’t be seen as “miserable” but actually good for growth around the world. He made the remarks on a huge trade visit to […] 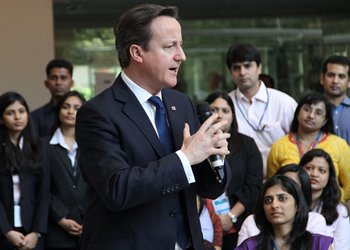 Prime Minister David Cameron believes ‘green’ business shouldn’t be seen as “miserable” but actually good for growth around the world.

He made the remarks on a huge trade visit to India yesterday when he took 100 delegates to strengthen links between the two nations.

Name-checking UK schemes like the world-first Green Investment Bank, a £3billion fund for green projects, as well as the carbon price floor which is more commonly nicknamed the ‘carbon tax’, Mr Cameron declared we have “only just started on the sort of relationship we could build”.

Speaking at a Q&A session hosted at Unilever’s Hindustan office, the Prime Minister told the audience: “We’re investing, with the help of Indian businesses, into massive offshore wind programmes so that our energy becomes less reliant on carbon.

“I think the argument we have to have right now, right across the world, is to try and prove to business, to our people, that this is actually a growth agenda. It’s not a miserable agenda of low growth, of no growth. It’s a growth agenda, because these new green technologies – whether it means waste recycling, whether it’s wind power, whether it’s nuclear power because there are no carbon emissions – these are growth items.”

Asked about what governments were doing on policy and regulation to push more sustainability, he said they “weren’t doing enough” and that “we are not on track to meet what we need to do to deal with climate change”.

Comparing India as “one of the largest democracies in the world” with the UK as one of the oldest, he said the “sky’s the limit” for working together.

On the UK’s largest ever trade delegation, it was announced that British firm Porvair has been selected to design and build char filtration systems in Jamnagar, the largest oil refining complex in the world.

The Government also said it will support the creation of a new pan-India network of British Business Centres by 2017, backed by £8 million of Government funding. Trade Minister Lord Green said the UK is on track to double trade with India by 2015.