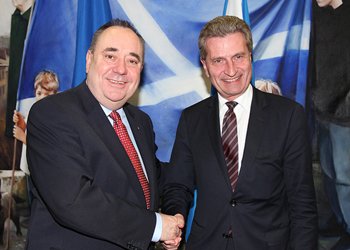 Hitting Europe’s climate change and energy targets was top of the agenda, according to Scottish officials.

The EU has committed to getting 20% of its energy from renewable sources by 2020, slashing greenhouse gases by 20% from 1990 levels and a 20% improvement in countries’ energy efficiency. The union also has plans to link up energy markets although these have had limited progress so far.

Speaking about the trip – which will take him to Aberdeen today – Commissioner Oettinger dubbed Scotland “an energy powerhouse” in Europe.

He said: “Europe can help Scotland harness that potential, through its policies to promote renewables, to build the required North Sea networks, to develop an integrated internal energy market that provides a level playing field to market those resources.”

The EU has been considering setting 2030 targets for renewable energy and carbon emissions and firm proposals could be on the cards by 2014.

Alex Salmond said this was an important part of the meeting: “Commissioner Oettinger and I discussed the EU’s climate and energy targets.  We agreed that defining a proper climate and energy framework for 2030, including a strong role for renewables, would be essential to stimulate the kind of sustained investment required to fully realise Europe’s huge low carbon potential and modernise the European energy system.  Scotland stands ready to play a full and active part in that endeavour.”