The country is in danger of a squeeze on its electricity margin of 3% which is a “real issue” for our energy supply, the Chief Corporate Officer of ScottishPower warned […] 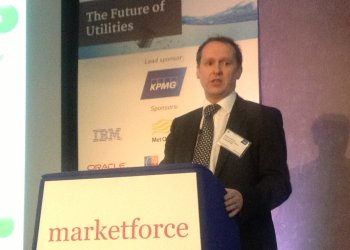 The country is in danger of a squeeze on its electricity margin of 3% which is a “real issue” for our energy supply, the Chief Corporate Officer of ScottishPower warned today.

This margin is the difference between our peak electricity demand and how much spare power generation we have to cover this peak demand.

Speaking at a conference in London Keith Anderson (pictured), warned the UK is in danger of “buckaroo politics”, with layer upon layer of policies piled on top of each other which could “pop” at any moment.

Striking a sombre note, Mr Anderson said that next week ScottishPower will begin dismantling the coal-fired Cockenzie Power Station which it closed down last Friday.

He warned that as more plants close – “and they can’t be brought back” – suppliers want to build new gas plants to replace this but their hands are tied by lack of clarity from Government.

There will be real consequences if this state of affairs continues, he added: “We’re going to sit and wait and what happens if we do that? The plants shut, the generation margin gets squeezed. Most people think if this falls to 5, 4, 3% that’s when you’ve got a real issue for security of supply…. That will happen, it’s happening today. The debate is whether it’s happening in 2016, 2017 or 2018.”

Sorting out the capacity mechanism in the Energy Bill and keeping it as “simple as possible” is the way out of danger, suggested Mr Anderson.