It was a sad and even emotional day for many workers at the Kingsnorth coal plant in Kent which officially closed today. After forty years of generating electricity, the 2,000MW […] 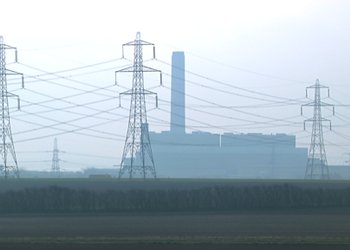 It was a sad and even emotional day for many workers at the Kingsnorth coal plant in Kent which officially closed today.

After forty years of generating electricity, the 2,000MW plant – which pumped 1,940MW of that to the grid – has begun a two year-long decommissioning process which could lead to demolition.

Energy supplier E.ON’s plant stopped generating before Christmas but today it officially closed with many workers packing up to go to new jobs or early retirement.

Kingsnorth employed 150 people in its heyday but had been operating with fewer workers over the last few months as some left to take up other jobs in the industry. Twenty staff will continue working on site.

Piles of cardboard boxes in office rooms and an empty control room testified the fact it is the end of the road for the coal plant which must shut to fall in line with EU legislation. The Large Combustion Plant Directive sets a limit on how much carbon dioxide power stations can emit.

Paul Graham, Site Closure Manager who has worked at the plant since 1999 said it was “strange” to find the control room empty.

He told ELN although he was a relative “newcomer”, some of his colleagues had worked at Kingsnorth their whole careers: “To be honest it feels very strange. This plant has been around for forty years and today is the last day when the majority of the staff will be leaving. The thing you notice is how quiet it is, eerily quiet.”

Mr Graham went on: “What we’re doing today is we’re breaking up a community. It’s sad when it has to come to an end. But fortunately many of the staff are of the same age as the plant and are moving on to retirement.”

The plant’s engineers spoke with pride about their plant, with Michael Vann, Operations Manager describing it as still “world class”.

He said: “It had 655 starts in 2012 – it was well known for its flexibility and availability. Even over the last year it didn’t decline and was still at its best. The only reason it closed was the LCPD.”

One woman who had worked at the plant in various roles for more than a decade said she had felt “emotional all day” as many at the plant said goodbye to colleagues.

E.ON says the site could be suitable for other work and has tested out biomass in one of its coal units. Despite this it has not plumped to continue running Kingsnorth with the alternative fuel source, most likely because of the cost.