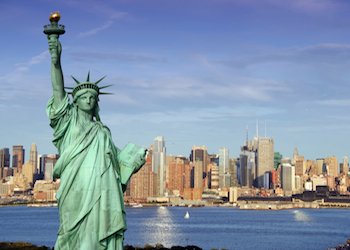 New York would need more than $300 billion (£196bn) and wind turbines covering an area equivalent to 13% of the city’s landmass if all of its power is generated from renewable sources.

The findings from Bloomberg New Energy Finance (BNEF) follows a study last month, which suggested the city has the potential to be powered 100% by “wind, water and sunlight” by 2030 and laid out a plan on how it could be achieved.

Researchers at Stanford and Cornell University called for 4,020 onshore and 12,7000 offshore wind turbines – a total of 40% of energy from wind power – as well as 387 solar plants and 828 utility-scale PV generators – a total of 38% of energy from solar. Wave, tidal and hydroelectric would supply the rest of the electricity. Currently, the majority of New York’s energy comes from imported oil, coal and gas.

Robert Howarth, a Cornell University Professor of Ecology and Environmental Biology and co-author of the study said: “We must be ambitious if we want to promote energy independence and curb global warming.”

Angus McCrone, a Senior Analyst at BNEF said: “It’s too ambitious by 2030 to replace all the state’s power with renewables, although big progress could be made.” He added the projections looked “unrealistic” for individual technologies.

New York currently gets around 11% of its energy from renewable sources, according to the state’s Department of Environmental Conservation.