Yellow taxis are synonymous with New York – but now cabs in the Big Apple are about to become a bit greener. Yesterday to coincide with Earth Day New York’s […] 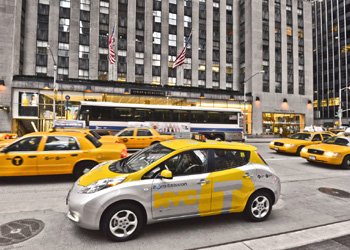 Yellow taxis are synonymous with New York – but now cabs in the Big Apple are about to become a bit greener.

The Japanese car maker is putting six of its LEAF taxis on the streets. Another of its models has already been chosen as the city’s Taxi of Tomorrow.

Mayor Michael Bloomberg said: “Even though the Taxi of Tomorrow won’t be on the road for another six months, we’re already looking ahead to the taxi of the day after tomorrow. Nissan’s proven track record with electric vehicles will put us ahead of the curve in helping us answer important questions about incorporating electric taxis into the fleet so that we can achieve the goal of a one-third electric taxi fleet by 2020.”