Carbon dioxide levels reached a record high at a key monitoring station in Hawaii (pictured) at the end of last week. The daily mean concentration of CO2 in the atmosphere […] 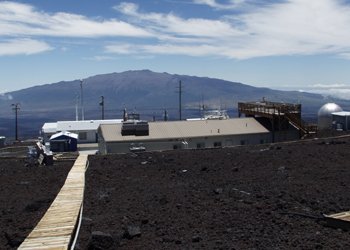 Carbon dioxide levels reached a record high at a key monitoring station in Hawaii (pictured) at the end of last week.

The daily mean concentration of CO2 in the atmosphere passed 400 parts per million (ppm) for the first time since measurements began in 1958, according to the National Oceanic and Atmospheric Administration (NOAA).

The NOAA said this marks an “important milestone” because Mauna Loa, which is the oldest continuous carbon dioxide (CO2) measurement station in the world, is the main benchmark site for monitoring the rise of the heat-trapping gas.

Pieter Tans, senior scientist at the Global Monitoring Division of NOAA’s Earth System Research Laboratory in Boulder, Colorado said: “That increase is not a surprise to scientists. The evidence is conclusive that the strong growth of global CO2 emissions from the burning of coal, oil, and natural gas is driving the acceleration.”

Before the Industrial Revolution in the 19th century, the global average for CO2 was about 280 ppm. During the last 800,000 years, CO2 fluctuated between about 180 ppm during ice ages and 280 ppm during interglacial warm periods. Today’s rate of increase is more than 100 times faster than the increase that occurred when the last ice age ended, said the NOAA.