The Mayor of London Boris Johnson has officially opened a new manufacturing plant in Northern Ireland where part of the new hybrid buses for London is being built. Wrightbus will […] 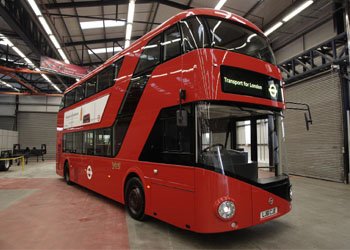 The Mayor of London Boris Johnson has officially opened a new manufacturing plant in Northern Ireland where part of the new hybrid buses for London is being built.

Wrightbus will build 600 of the Mayor’s new buses over the next three years at the chassis plant in Antrim. The bus is claimed to be more fuel-efficient and produces 20% less carbon dioxide, with the fleet expected to cut carbon emissions in the capital by almost 20,000 tonnes a year.

The order of the new buses will also help create 50 new jobs when full production is underway.

Mr Johnson said: “London’s transport network is the supply line for new jobs and growth around the whole of the United Kingdom. We already support 40,000 jobs outside of the capital and we believe we can create more. The programme of transport improvements we want to see in the capital is bursting at the seams with job generation potential and that is why protecting investment in London transport should be the Government’s top priority as they consider how best to conduct this summer’s spending review.”

Route 24 will become the first route in the capital to operate entirely with the new buses at the end of next month. When the final batch of the new bus is delivered in 2016, more than 1,600 hybrid buses will be in service on the streets of London.