Brazil has opened its first football stadium powered by solar energy in preparation for next year’s FIFA World Cup, reports claim. The Minerao Stadium (pictured), located in the southeastern city […] 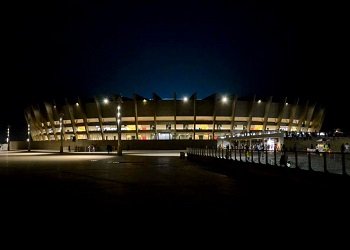 The Minerao Stadium (pictured), located in the southeastern city of Belo Horizonte, was originally built in 1965 and has been fitted with a 1.4MW solar array on its rooftop.

The project is said to have cost around €12.5 million (£10.7m) and includes 6,000 panels – enough to power around 1,200 homes. The energy generated by the solar system, however, won’t be used directly by the stadium but will be fed back into the grid, according to reports.

This project is said to be the first of many as the Mane Garrincha stadium is also expected to be fitted with a 2.5MW PV system, equivalent to powering nearly half the ground.

Reports also claim organisers had initially planned to install solar arrays in all 12 of the 2014 World Cut venues but with just over a year until the games begin, the target may have been reduced.